July 25, 2020
It has been said that there are three kinds of people in the world.

We had some people who made this Matching Donation Challenge happen! These are the people who will storm the bastille with you! Our fans at the University of Alabama issued TNKR a challenge--and TNKR met it!

* Donor Participation! We had almost 500 donations overall. At times we had so many donation notifications coming through that our Alabama fans felt like they were under attack! As I stress--participation. So many people seem to be embarrassed about the amount they donate, but I make it clear when I donate, as I slam the money down on the table. "And you're lucky you got that!"

* Fundraising! We raised about $42,000, a few donations are still pending, so please wait before declaring the final amount, I will announce that after we RECEIVE it.

* Sharing! I sometimes hear people say they don't want to talk publicly about their volunteer work or donations. That is a nice irrelevant out-of-date sentiment that is now a dead-end street in this social media age. Don't worry about the "humble brag" complainers. Sharing and talking about your activities can get others involved, which helps raise awareness for organizations and causes. And many people did share this Matching Donation Challenge, resulting in others donating. Plus, when people did public donations, their family and friends were likely to see it, resulting in more donations. Probably the top sharer, as usual, was TNKR Fan Club president Eben Appleton.

Of course, there are many to thank, but I would like to highlight the top fundraisers who made it happen, each raising $1,000 or more.

The next top five fundraisers:

(The world is a funny place, people who don't do anything feel comfortable analyzing people who did do something. So my rule about fundraising: Only analyze the fundraising totals of people who raised less than you did.)

If you were just an observer this time...what are you waiting for, an engraved invitation?

As a result of this effort, TNKR co-founder Eunkoo Lee (temporarily) released her tight grip on the neck of our budget, allowing me to make two hiring decisions I have had in mind for quite some time. We have hired two TNKR students as staff members, bringing the overall total to three North Korean refugee staff members. 42% percent of TNKR paid staff are TNKR students who have all been with us since 2015. And yes, I have some more ideas for hiring and expansion, and look forward to us having more money to make them a reality.

This particular fundraising challenge has come to a wonderful end, but of course TNKR's opportunities for growth (and the bills that come along with that) are never over, so you can always donate to www.lovetnkr.org/donate

It is a little tricky with mentioning donors by name, many feel uncomfortable being highlighted. I would like to mention, however, the Haanong company. They hosted a small event for TNKR. The founder of the company was so inspired by what he heard that he offered a donation of $7,000 on the spot.

Thanks to those who helped make the Matching Donation Challenge happen. Last night I messaged with the Matching Donor and the main team members from the University of Alabama, the Matching Donor confirmed that he is thrilled to match the amount that we raised. So they made this entire fundraising effort possible.

What if I hadn't checked my spam folder? 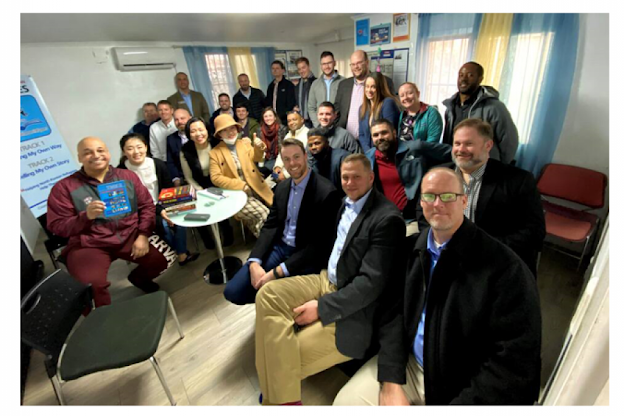 September 07, 2020
Update: https://www.youtube.com/watch?v=6qR1PEEiJjI&list=PLn7xtnmarHFo0ddUJrmXFFN6Wd2VyrL9I
TNKR will be featured in an 8 minute segment on MBC TV in South Korea, this Saturday morning September 12th during the show Unification Observatory from 7:20 a.m.저희 TNKR이 MBC 통일전망대에서 소개될 예정입니다! 이번주토요일(9월12일) 오전 7시 20분입니다~An MBC film crew spent more than 5 hours at the TNKR office today, interviewing staff, volunteers and students.Have you ever seen a lousy movie and wondered, "Why didn't the actors quit during the filming?" That was my feeling today as we were being recorded by MBC TV. Most of it was wonderful and I am sure it will look great on TV. And it will be even better if they cut the worst scene I have ever been in during my many years of being featured in media. The main reason I didn't walk off the set? Lovely Sharon Jang called me an angel during the middle of the scene, so it might not have looked good for the angel to storm off in a huff.By the way, I don't…
Read more

August 26, 2020
We had a special VIP guest today! Kuang-ok, the young lady who was with me on the TV show "Eye Contact."
www.lovetnkr.org/donate

I think we first met almost two years ago, when she joined TNKR as a student. She had been in South Korea for less than a year at that point, so things were still new for her. I still remember when she first joined TNKR, a few years older than her peers in school. She had already made some decisions about her life.
Her English has improved so much, her confidence is sky high, she is focused on her goals, and takes action. She is born determined and goal-oriented, but also flexible and still looking to learn.
She may still need mentoring, but it seems more like it will develop more into a partnership than a mentorship.
Sometimes people ask those of us volunteering or working at TNKR why we do it. The meeting with Kuang-ok today was a wonderful reminder why.

* * *
Here are four clips from the show. I haven't watched the show, but have heard from severa…
Read more

July 25, 2020
The question comes in various forms, as a request, a recommendation, a plea, an insinuation, an accusation, and sometimes (or most of the time) it is a demand and complaint at the same time.
In my in-box yesterday: "And I wanted to know if TNKR also transitioned to online services as any other educational institutions globally under the pandemic."
This was from a previous volunteer who is now in the USA, so I took more time to answer him, and will expand it now so I can share it with others asking.
As context, TNKR started in 2013 as an informal volunteer group connecting North Korean refugees with volunteer tutors. In 2016, we became an official organization despite lacking funding. Mainly because we have limited resources we keep focused on our main mission, but try to expand based on the needs of North Korean refugee learners. We have developed a learner-centered organization that has a great reputation among North Korean refugees. That means we are not a social club or refe…
Read more