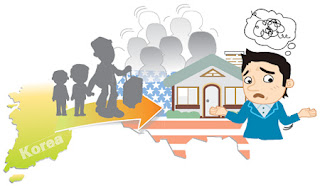 What about "No" would they not understand?

The Korea Times identifies a new problem: freeloading Koreans visiting relatives in America. The cause: it is now easier for Koreans to travel to America because of a visa waiver.

1) I am amazed at some of the people that reporters can find and about the things people will say to reporters. Complaining because you can't say no to family? Even if I did want to complain about such a thing I would not do so to a reporter.

2) Perhaps Koreans need a return to the good old days, back to 1987 when martial law prevented most Koreans from traveling abroad without a good reason (education, religion or business). A great thing about freedom is that we can complain about trivial things, and even be taking seriously by reporters. When Koreans were living under dictators they wished for the chance to travel abroad.

3) The most obvious solution, besides saying no the first time relatives and friends ask: Say no the second and third times they ask. Is it better to be known as the unfriendly relatives who won't let others stay at her place for a month or to live with visiting relatives for a month when you don't want to do so? That's a choice everyone must make. The people complaining apparently made the choice to say yes to relatives.

4) Send the link CouchSurfing to all of your Korean relatives--people apparently enter a network that allows them to crash at the homes of other people, as long as they allow others to crash with them. But only send the link if you are sure you won't need to crash at a relative's home for a month. I do wonder how many of the Koreans in America griping about freeloading relatives crash with them when they come to South Korea?

5) How many people do say no to relatives or find an excuse? It would be nice to hear that in such an article although people may not want to admit it. It may be that just a handful of people don't know how to say know.

6) Sometimes it may seem that I hate reporters. Not completely true.

More than a few South Koreans have said this to me, apparently they were being serious. The conspiracies started based on the government's slow response. Then, suddenly, the government's quick response helped explain why it was a conspiracy--they had been caught and had to cover up what they had been doing by appearing to be busy. Upcoming elections--a handy explanation for any conspiracy theories--were cited as proof of a conspiracy.

The conspiracy theorists are also quite sure that former South Korean president Roh Moo-hyun, who reportedly committed suicide, was killed.

Of course, I don't know the truth in either case. They don't either, by the way.

I may eventually buy a camera because I have learned that I enjoy taking photos. I wasn't always this way, I guess it is a sign of old age.

So I can appreciate the picture-taking culture here. As I've previously blogged, I often see Koreans taking photos of themselves.

I was in a sandwich shop earlier today...

I really, really wanted to take photos of them all...

Item 1:
"A Texas man with no military experience managed to trick the Army into letting him enter a reserve unit as a noncommissioned officer earlier this year, putting an untrained soldier in a leadership position in a time of war, an Associated Press investigation has found."

Item 2:
"A former Harvard University senior is facing 20 criminal charges for allegedly creating a fraudulent life history that led to his admission to Harvard, and for using forged academic materials from Harvard when he applied for the prestigious Rhodes and Fulbright scholarships."

Item 3:
"When does Idaho Congressman Walt Minnick plan to quit lying about his military service? It's been a week since it was first pointed out that Walt had been misrepresenting his service on his campaign Facebook page and, as shown below, still no change. Today that lie was repeated nationally by KIDO radio's Austin Hill."

What's next? As some have pointed out, Obama faked his way into the White House, so that could be the next big story.