May 31, 2020
All of the fundraisers are special in their own way, wonderful little snowflakes gently landing on my head. This particular post today will highlight Eunhee Park's fundraiser.

In addition to the usual ills plaguing mankind, there is a global pandemic, riots in the US, and probably a lot of mayhem going on in other countries.

Despite that, some people are still taking the time to support the Teach North Korean Refugees Global Education Center (TNKR).

I must highlight TNKR Ambassador Eunhee Park setting up two birthday fundraisers to support TNKR. It is extra special when one of the students in your program believes it is important to raise money to support the organization.

In just one day, she has already raised more than $400--and it isn't even her birthday yet. What has been the secret to her success?

* She personalized the message.

* More than 700 people have been invited to donate, I am assuming by her. Eleven people have donated so far. She is being proactive with it, which is important. Most people don't bother with even setting up a fundraiser, which Facebook has made so easy to do. Many who do set them up don't invite anyone. There are so many messages, so many controversies in the world that it is easy for postings to get lost in the shuffle.

* She set up fundraisers at both Facebook and re-posted her fundraiser at our crowdfunding site. 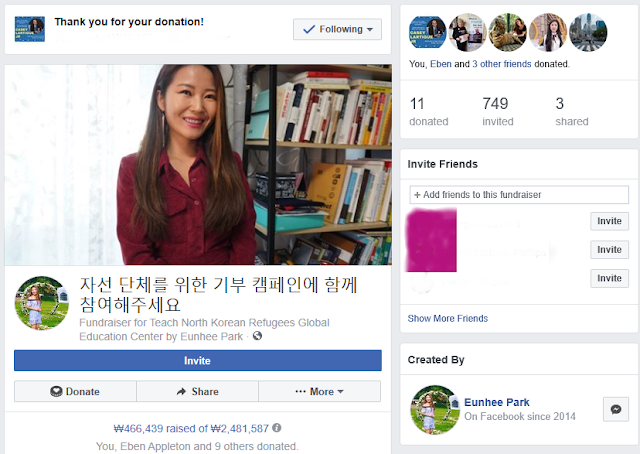