As someone who has been a writer, talk show-host, analyst, activist, educator, etc., I have gotten used to criticism. Most critics can be safely ignored because they rarely have constructive things to say. If they could do what they were complaining about, they would do it rather than complaining about what someone else was doing.

As someone who is used to critics, how do I to respond when a fan comes to visit? 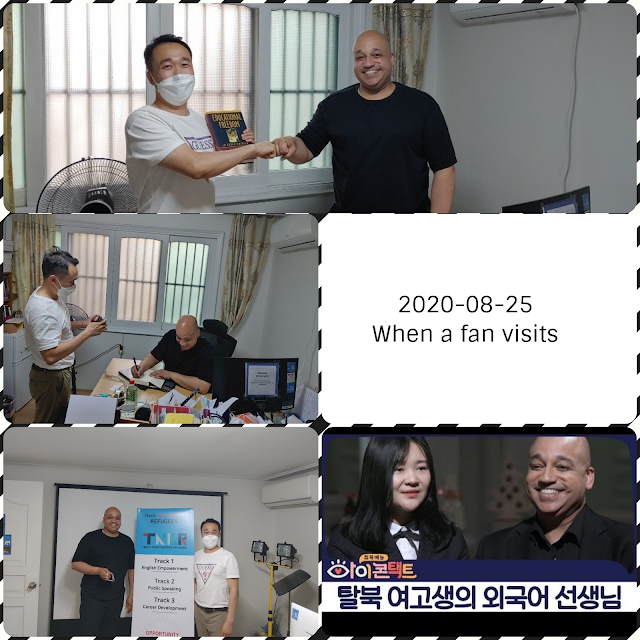 Mr. Kang saw me on a Korean TV show that was recently replayed. Unlike many people who watch but don't do anything, he called the TNKR office. He wasn't calling just to learn or talk about TNKR. He wanted to meet ME.

So today we met! It was an enjoyable time. It is a funny feeling know that someone has come out to meet you. We talked, I gave him a copy of the book I co-edited years ago, along with other TNKR, then took photos.

You can see some of the clips from the show, which I have heard lasted 30 minutes (I have yet to watch it and may never do so). 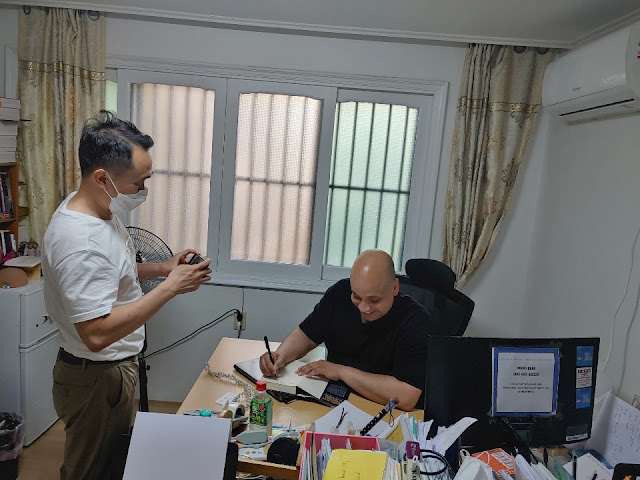 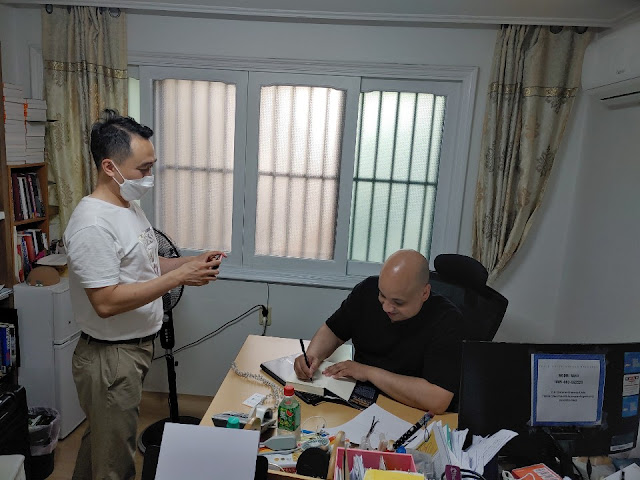 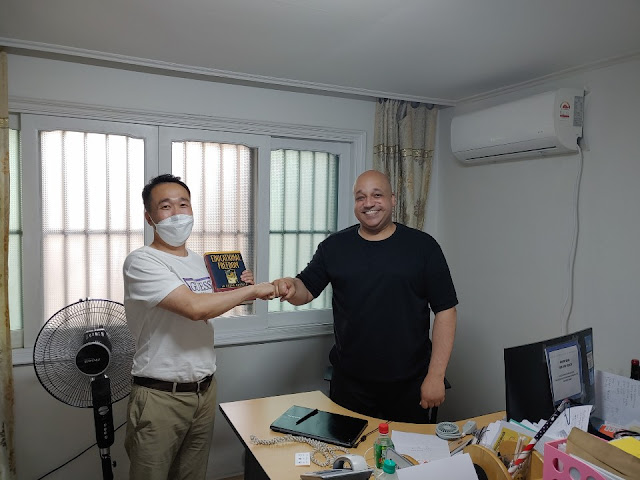 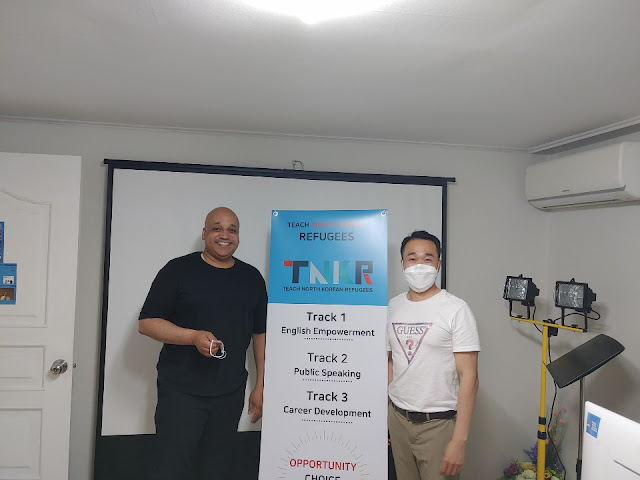 * * *
He saw us on Eye Contact, which originally aired in December 2019. I haven't watched the show, but I heard that it was excellent. 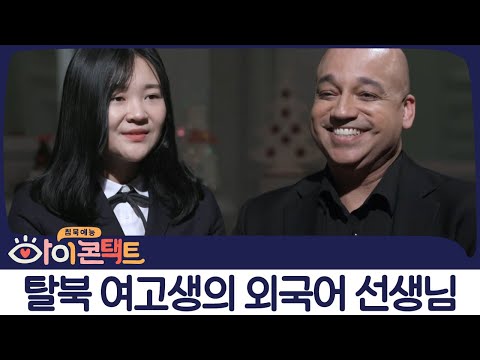 November 12, 2020
www.lovetnkr.org/donate I was delighted to host Eunhee Park at a speech last week to graduate students. Eunhee has spoken at the Asia Liberty Forum, the Oslo Freedom Forum, given a TEDx Talk, and also won local English speech contests. She is the kind of speaker who is ready to a thoughtful speech, to answer any questions, and to even ask questions of the audience. Some audiences aren't ready for a speaker like her ready to engage them! Many audiences just want to passively listen. I gave a speech to them about a month ago, then invited Eunhee to follow up. ***************************************************** Nothing compares to TNKR A few years ago, when high school students applied to volunteer with TNKR, I was like the old neighbor yelling, "You kids get out of my yard!" After experiencing enough high school kids expecting to get a volunteer certificate for volunteering for a few hours then never contacting us again, I wrote them off. We were trying to build an organi
Read more

November 01, 2014
Teach North Korean Refugees earlier today hosted its 20th English Matching session. We have now matched 124 refugees, 174 volunteer teachers, and 9 South Koreans working for NGOs or helping NK refugees in some way. Special thanks to Nina Hong, Katie Yuk, Claire Jessica Tighe, Kristen Lefebvre, Gabrielle Wray, Angela Miller, Noa Sunyoung Lim, Hannah Gzik, Nicole Kahansky, Suzanne Atwill Stewart for joining TNKR. It was a particularly sweet session--7 North Korean refugees, 10 volunteers, 1 reporter, 1 Ambassador, 2 co-directors, 1 cameraman, and 1 donor--and a partridge in a pear tree! Because of rumors of dating, we banned male tutors from this session ( as I explain in more detail at the bottom of this post ). One refugee was clear. Her English wasn't that great, but she said: "I want strict teacher." We want to create a project so serious students like her won't have volunteers trying to get her to go hiking or hanging out. I got criticized by
Read more

October 19, 2020
Last week was a busy time, many meetings both in-person and online. In this blog post: Partnerships Interviews Volunteers Speech ______________________________________________ 1) Partnerships New TNKR board member This is significant, a former Supreme Court justice has agreed to serve on TNKR's board of directors. This is important, it shows how TNKR has become a more mature organization. During 2021, we hope to develop more partnerships with organizations and individuals who can help raise TNKR's profile and impact. Meeting with a huge organization They have a huge building and many projects going on. They could fit all of TNKR in a corner and not even notice. Even our budget could disappear into their budget without them noticing until an auditor pointed it out. Despite that, they would like to partner with us. This is another sign of TNKR's maturity as an organization. Years ago, we would not have dared to meet with them, we were a fly-by-night group with no apparent pa
Read more

November 03, 2019
The Hana Foundation held its third Youth English Speech Contest. I was delighted to be a judge for the third consecutive year and for TNKR volunteers to also mentor many of the contestants. ******** From A-B-C to T-E-D * Eunhee Park , grand prize winner of the Young Adults category, is a TNKR student and ambassador. It didn't take long for the judges to conclude that she was the winner yesterday. It is hard to believe that four years ago, she was at the ABC level.   People naturally focus on the winner of a contest, but one thing I try to stress in TNKR is the process . Eunhee competed in three TNKR English speech contests before she won, going from honorable mention, to 2nd place, to Grand Prize winner last year. She is fearless, thoughtful, so she probably has an advantage over others who fear the stage. That's also why she was the NK refugee to be co-MC of a TNKR English speech contest. She has now started a YouTube channel ( SUBSCRIBE! ) and be sure to ch
Read more