Volunteering at the school choice rally

October 01, 2009
Yesterday morning I volunteered at the rally for the Opportunity Scholarship Program. My, how time has flown! Six years ago I was one of the folks who was lobbying Congress to set up the program. Yesterday I met some teenagers who were in the 2nd and 3rd grades back when we were pushing for the program. Now, some of them are big enough to whip my ass in a fight. So, yes, there is a good reason for these kids to get a quality education. 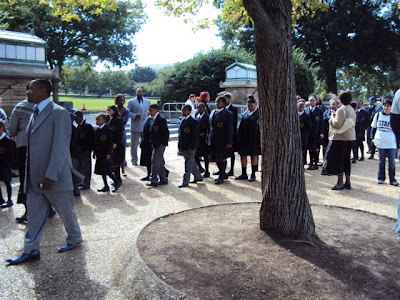 This group was organized...I wasn't looking, but I bet they walked off the bus in 2s. 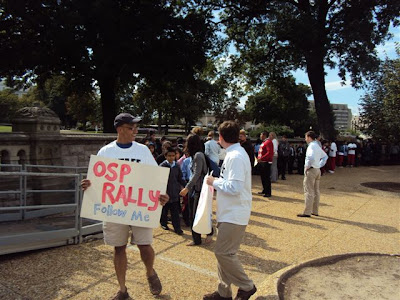 I had my group line up against the wall. They had a tough teacher with them, believe me, I was saving them by taking control. That was a no-nonsense lady. She wasn't even interested in small talk with me as we walked the kids over. 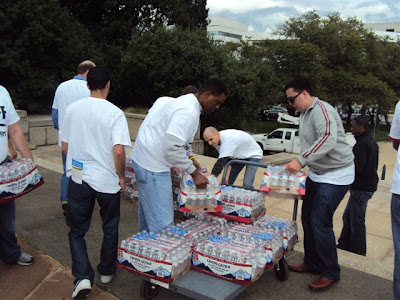 Behind the scenes, the staff volunteers were loading up the water and food. Considering how heavy the water was I figured it was a good time to get out my camera to document the heavy lifting being done. Gerard Robinson (the brother about to drop the water) is the president of the Black Alliance for Educational Options. As I mentioned to him then..."Good to see you putting that Harvard education to good use." 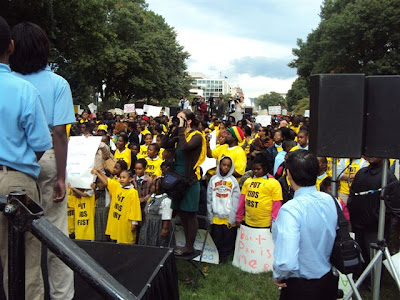 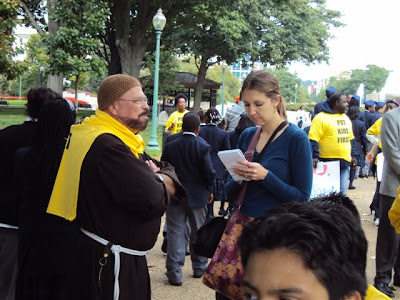 I wonder if the reporter quoted him in the story. 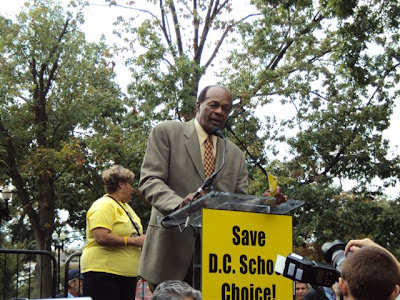 My man! Marion Barry! We talked school choice a few months ago at a different rally. He told me then that he has always been a school choice supporter. I asked why he led the charge against the 1981 tuition tax credit referendum and was invisible when Republicans tried to pass DC choice in 1995. He said he just didn't like those particular proposals...which he later translated as, "There wasn't any money for D.C. in those plans." 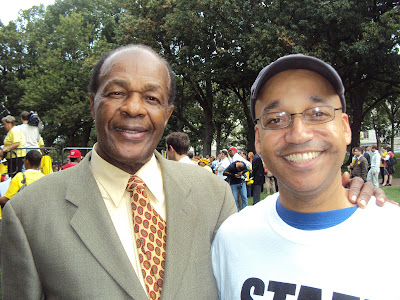 A few years ago at an event I was standing next in line while a lady went on telling Mayor Barry how great he was and how much he had done for the city. I've seen that a number of times. I said to him that time that it must be nice to have people praising him like that. He responded, "You gotta earn that." I said I was using my own money when I help so I guess I would be less effective. He then gave me a quick lecture I don't recall about the virtues of public service. 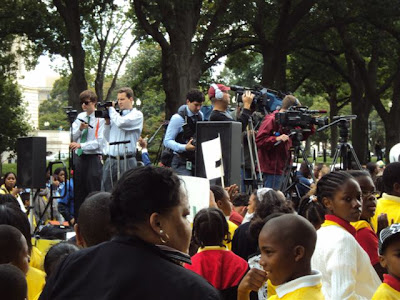 Media. There were more lurking around. 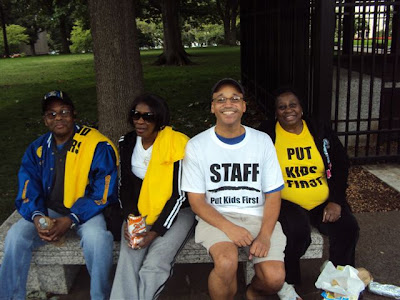 These folks were hanging around. I remember going on Capitol Hill a few years ago with the lady on my left. My, how time has gone by... 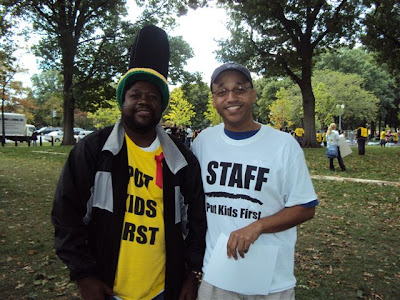 We recognized each other almost immediately. Six years ago we didn't have many black fathers attending rallies and events so he was noticeable just for that reason. 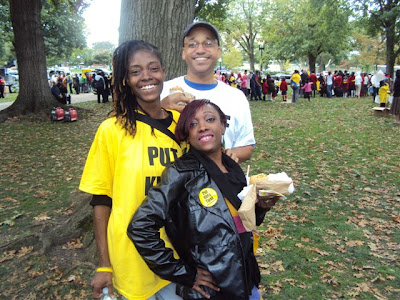 The woman with the yellow shirt was ready to attack a public school heckler who showed up. I remember talking with her a few years ago. 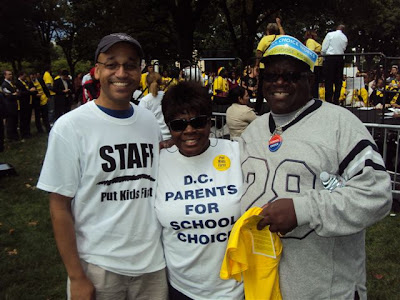 I love this couple. They have been some of the movement's strongest parent advocates. She hugged me so tightly when she saw me that I think I lost 2 pounds.

After the rally was over I went on Capitol Hill with some of the parents to hand out propaganda about the voucher program. Not to say you can judge people based on their staff, but the folks at the offices of Reps. Tiahrt, Issa, and Jackson were absolutely delightful. If you ever get arrested then those are some folks you'd want in your speed dial.

Another added benefit about Jackson's office was the number of beautiful looking ladies working for us all. Tiahrt and Issa are both Republicans, their staff were really friendly even before we told them why we were there. Jackson is a Democrat, but even after we told the staff why we were there, they were still incredibly friendly. Of course, based on his father, Rep. Jackson may want to have my number in his speed dial.

On the other hand, the staff in the office of Rep. Barbara Lee seemed to be concerned we were there to spread the H1N1 virus. The folks in the offices of Delegate Norton and Reps. Emerson, Clyburn, and Serrano were fine.

* Lead one orientation session and one Language Matching session per month.

* Monitor the program by working with volunteer tutors, coaches and mentors studying with North Korean refugees.

* Continuously update the program to fit the needs of North Korean refugee students as a priority and keeping it as flexible and rewarding as possible for volunteers.

* Minimum one year commitment.
* Able to be legally paid in South Korea with your current valid visa that you confirm through immigration (or that you are a South Korean citizen).
* Available to work during office hours at the TNKR office near Sangsu Station,…
Read more

July 25, 2020
The question comes in various forms, as a request, a recommendation, a plea, an insinuation, an accusation, and sometimes (or most of the time) it is a demand and complaint at the same time.
In my in-box yesterday: "And I wanted to know if TNKR also transitioned to online services as any other educational institutions globally under the pandemic."
This was from a previous volunteer who is now in the USA, so I took more time to answer him, and will expand it now so I can share it with others asking.
As context, TNKR started as an informal group connecting North Korean refugees with volunteer tutors. In 2016, we became an official organization despite lacking funding. Mainly because we have limited resources we keep focused on our main mission, but try to expand based on the needs of North Korean refugee learners. We have developed a learner-centered organization that has a great reputation among North Korean refugees. That means we are not a social club or referral agency for pe…
Read more

July 24, 2020
Hello, my name is Jade. I was recently hired as the Academic Coordinator of TNKR’s education programs. As a North Korean defector who has been studying in TNKR since 2015, I feel this is an incredible achievement and I appreciate the opportunity to work in TNKR.It is a remarkable thing for myself because I was not confident when I joined TNKR Track 1’s English language program. Now, five years later, it is possible to work in TNKR, communicating with people in English. I truly want to thank the volunteer tutors and the co-founders, Casey Lartigue and Eunkoo Lee.Through TNKR, I have studied with more than ten teachers who were enthusiastic and loving. They led me to be here by sharing their time with me and I am so thankful to them. I am so thankful for Casey and Eunkoo’s leadership in building such a wonderful organization helping so many people.In TNKR, in addition to learning how to speak English, I have also learned the importance of having compassion to help those who are around y…
Read more