June 15, 2020
What's crazier--that I did Zoom calls about Teach North Korean Refugees (TNKR) at 2 and 3 am in the morning on May 31st? Or that I did six hours of Zoom calls yesterday?
* If I worked as a staffer at a company, then idiot and lazy employees would accuse me of brown-nosing or sucking up to the boss. I am the co-founder of TNKR, so there is no one for me to brown-nose to, for or with. People who don't enjoy their work are baffled by people who do enjoy it. It was fun. TNKR is my favorite subject these days, so talking with people about it is enjoyable. Then when people hear how much I love what I am doing, I get to hear something else--people telling me not to work so hard. As I tell them: Talking, having meetings, planning? That is not hard work. I was a mover in college, that can be hard work. Manual labor or construction is hard work. Office "work" isn't physical labor. People might as well as warn me about the dangers of being alive as to warn me about the dangers of "office work."
* I was delighted that so many people logged on for opportunities to volunteer. That's right, volunteering! Not just chitchatting. When it is time to pet the puppies or wrestle with the kids, organizations can get plenty of people to come out. But to talk building an organization? That is amazing.
* Of course, some people are in a hurry. They don't seem to realize that we are an official organization, we don't just toss out volunteering opportunities. We need to get to know the people who want to volunteer, figure out how their interests and skills match with our possibilities and approach. Some people will filter themselves out, but some will get involved and make a difference.
* What's crazier? Leading six hours of calls as I did, or being a participant as Eben Appleton was for all six hours? That's right, Eben Appleton was parked at Zoom for all six hours, until 2 a.m. in Tennessee. She participated in two of the calls and observed another one. She was even logged on as soon as we logged on, so I don't know how much longer she had been waiting for the TNKR Show to come on!
* Eunkoo Lee was also there for all six hours! She disappeared for a while--to hold an orientation with a new volunteer joining a separate program that TNKR facilitates. So she wasn't exactly slacking off.
* It was a great day. I have decided to hold another TNKR Zoomathon. I proposed a number of things yesterday that I hope will become a reality. Of course, it will take team work to get them done. Hopefully we will start to organize into teams then.
https://lovetnkr.org/event/june-27th-zoomathon/
* Some people who know that I resist online tutoring for refugees may be surprised that I have embraced Zoom for meetings. That means they don't read closely. For one, we have tried online tutoring a few times, but as a refugee learner-centered organization, we must pay attention to what they want. If TNKR students are not asking for online education, and even saying they can get it from other places, then it would be a mistake for us to try to force it on them. Two, I have said for years that online is great for meetings and emergency situations. And three, I am a "Situationist." I warn people not to try to come up with eternal commandments from me, I look at the situation that decide what makes sense.
www.lovetnkr.org/donate 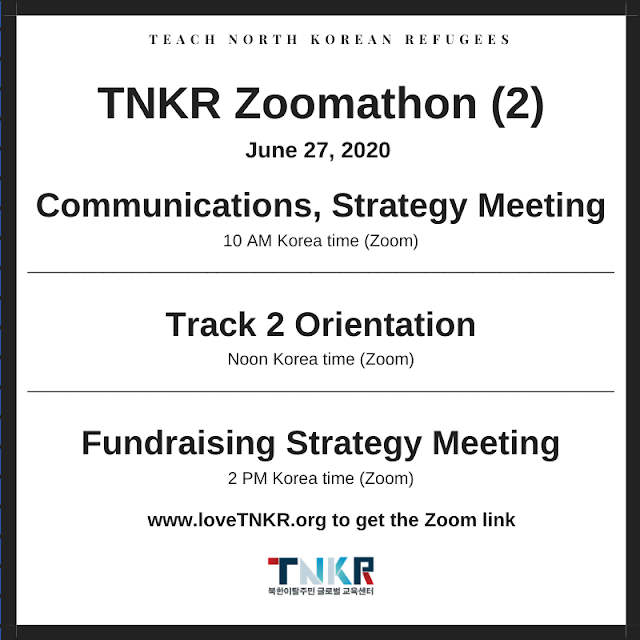