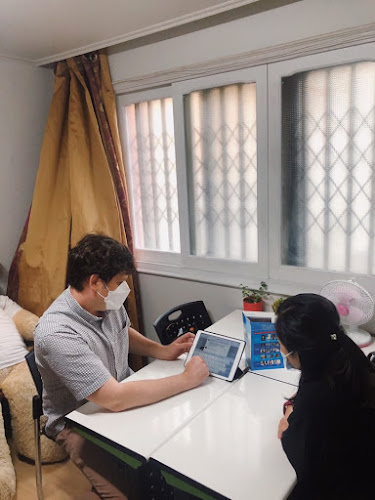 Peter tutoring a student at our office yesterday, July 24,2020.

September 07, 2020
Update: https://www.youtube.com/watch?v=6qR1PEEiJjI&list=PLn7xtnmarHFo0ddUJrmXFFN6Wd2VyrL9I
TNKR will be featured in an 8 minute segment on MBC TV in South Korea, this Saturday morning September 12th during the show Unification Observatory from 7:20 a.m.저희 TNKR이 MBC 통일전망대에서 소개될 예정입니다! 이번주토요일(9월12일) 오전 7시 20분입니다~An MBC film crew spent more than 5 hours at the TNKR office today, interviewing staff, volunteers and students.Have you ever seen a lousy movie and wondered, "Why didn't the actors quit during the filming?" That was my feeling today as we were being recorded by MBC TV. Most of it was wonderful and I am sure it will look great on TV. And it will be even better if they cut the worst scene I have ever been in during my many years of being featured in media. The main reason I didn't walk off the set? Lovely Sharon Jang called me an angel during the middle of the scene, so it might not have looked good for the angel to storm off in a huff.By the way, I don't…
Read more

August 26, 2020
We had a special VIP guest today! Kuang-ok, the young lady who was with me on the TV show "Eye Contact."
www.lovetnkr.org/donate

I think we first met almost two years ago, when she joined TNKR as a student. She had been in South Korea for less than a year at that point, so things were still new for her. I still remember when she first joined TNKR, a few years older than her peers in school. She had already made some decisions about her life.
Her English has improved so much, her confidence is sky high, she is focused on her goals, and takes action. She is born determined and goal-oriented, but also flexible and still looking to learn.
She may still need mentoring, but it seems more like it will develop more into a partnership than a mentorship.
Sometimes people ask those of us volunteering or working at TNKR why we do it. The meeting with Kuang-ok today was a wonderful reminder why.

* * *
Here are four clips from the show. I haven't watched the show, but have heard from severa…
Read more